Aladdin Is Set In A Distant Post-Apocalyptic Future

A popular (and quite possibly the first) Disney theory argues that Disney’s Aladdin is set in the distant future, rather than the past, and that this can be proven by a handful of hints dropped by Genie in the movie.

I already have my own theories about Genie and his flexible approach to linear time, but since this idea has so many supporters it’s at least worthy of some consideration.

Is Aladdin Actually Living In A Post-Apocalyptic World?

In the middle of Aladdin’s make-over in to Prince Ali (fabulous he) Ali Ababwa, Genie declares that his fez and vest combo is ‘much too third century’.

But on emerging from the lamp, Genie has already announced that ‘ten thousand years will give you such a crick in the neck’.

Since Genie has been locked in the lamp for all that time and would be in no position to observe current fashions, this would mean that Aladdin is set in the year 10,300 at the earliest.

In fact, since Genie is voiced by the ridiculously versatile Robin Williams, he can’t help but impersonate a variety of 20th Century personalities (Arnold Schwarzenegger, Groucho Marx, Rodney Dangerfield, Jack Nicholson – to name a few). This would put the date back even later – meaning Aladdin takes place some time after the year 11,970.

This can then be used to rationalise many of the ‘magical’ elements in Aladdin‘s world (though ironically not Genie himself).

Carpet isn’t just a ‘magical carpet’, he’s a remnant of hover-technology that has been hidden in the Cave of Wonders, presumably to keep it safe from the coming nuclear war that turned the world in to a big empty desert

Similarly, Iago isn’t just another anthropomorphic Disney character. He’s either the result of a society so obsessed with its pets they developed technology to understand their animal’s every thought (why anyone would want these thought expressed in the voice of Gilbert Godfrey is another question entirely) or a mutation caused by nuclear fallout (slightly more likely, assuming that as the daughter of a Sultan, Jasmine would almost certainly get a translator to understand her beloved tiger Rajah). 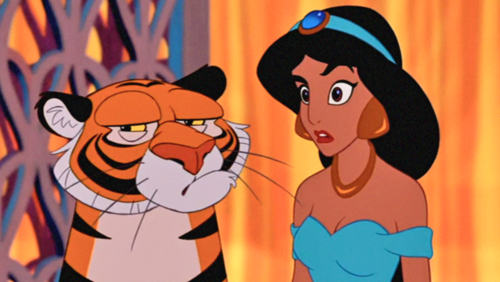 Agrabah isn’t even a real place in the history of the Middle East. Instead it’s assumed this is some form of future corruption of the names Egypt, Arabia and Afghanistan, used as a generalisation since specific nation states are largely irrelevant in the post-apocalyptic wastes.

Advocates of the theory have also looked beyond the motion-picture to the Aladdin videogame for more evidence. Finding bones of the nuclear war’s dead, buried 20th Century road signs and even unexploded nuclear devices to support the futurist theory.

Finally, some have suggested that there is a monolith to the incredibly historically relevant Nintendo Wii in Aladdin‘s Cave of Wonders, which doesn’t seem to make any sense at all but makes for an entertaining image.

So what do we make of this theory?

Well obviously it’s nonsense. The theory tries to tie Genie to one time and place when clearly he’s a being with a perception of time very unlike ours.

It’s also odd that he would reference the 3rd and 20th Centuries and nothing in between. We could assume that the connecting years were another period of time he spent imprisoned in the lamp, but what are we supposed to make of his obvious trip to Disney World on being granted his freedom?

I’ve written plenty about Genie and his crazy time-bending in my 30 Disney Movies That Share A World and Wreck-It Ralph Proves The Disneyverse Is One Giant Computer articles, so I’ll save you by not reiterating them now.

Instead, I would like to present two theories that I find much more believable than this Aladdin Theory.

Aladdin is definitely set in the past because Belle is reading a book about him in Beauty and the Beast.

‘Here’s where she meets Prince Charming. But she won’t discover that it’s him ’til chapter three!”

The entire story of Aladdin is made up by the merchant at the beginning to sell you an old lamp.

‘Look at this! Yes! Combination hookah and coffee maker, also makes julienne fries. Will not break!’

Which is your favourite Aladdin theory? Comments below.

This entry was posted in The Disney Theories and tagged Aladdin, Beauty and the Beast, Disney, Games, Head Canons, Movies, Theories. Bookmark the permalink.