In 30 Disney Movies That Share A World  I presented the theory that the worlds of the Disney universe are all part a big alien experiment featuring endlessly connected, repeating narratives.

Wreck-It Ralph blew that theory out of the water, showing that Tangled – and therefore Frozen, Tarzan and basically every Disney favourite – are actually linked worlds in a giant computer program that plays out every time someone pays to play it again.

And then Big Hero 6 was released. An astounding, action-packed Disney blockbuster that pulls no punches and proves to be an even bigger departure from the Disney canon than anybody realised…

Because Wreck It Ralph is just a game in the ‘real’ world of Big Hero 6.

Wreck It Ralph spottings in Big Hero 6 are so numerous it would actually be hard to argue that it’s not a game in Hiro’s San Fransokyo.

First there are the video screens and billboards across the skyline, which clearly advertise games from the worlds of Wreck It Ralph.

Wreck It Ralph games Fix It Felix Jr, Sugar Rush and Hero’s Duty advertised on the skyline of San Fransokyo.

And as a bot-fighting super geek, Big Hero 6‘s protagonist Hiro is clearly no stranger to computer games, so it shouldn’t be a surprise to also find a Wreck It Ralph figure on his computer screen… 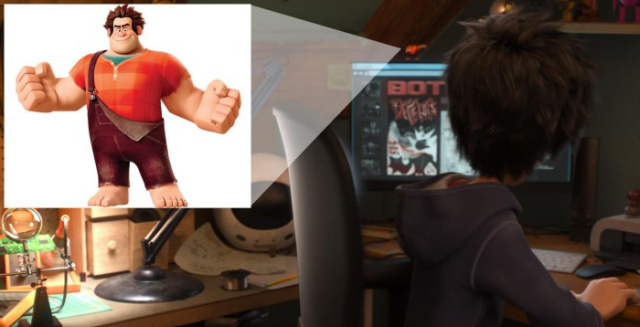 No Fix It Felix. Hiro is clearly a fan of the underdog.

…as well as the Hero’s Duty action figure that falls from his shelf on to his head.

Never to be outdone, rich eccentric kid Fred actually has a life-size replica of the Hero’s Duty suit of armour in his room. 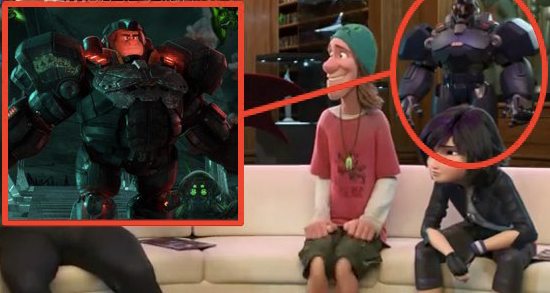 Which has to settle it.

Wreck It Ralph clearly establishes that its own world is just a collection of videogames played by the inhabitants of the ‘real’ world outside (and therefore so is every Disneyverse world that connects to it).

Big Hero 6 is that real world.

Because thanks to a cameo from a certain animal control officer, another modern Disney favourite proves itself as part of the real Disney universe…

They must be very happy together…

Look closely at the photos on his desk and you’ll see that the animal control officer in Bolt is in fact the dear wife of Big Hero 6‘s police desk clerk.

This means that Penny and Hiro, Bolt and Baymax all exist in the same America, where almost every other world in the Disneyverse is part of an elaborate interconnected fiction.

Which only leaves the Hans paradox…

Oh the Hans paradox you ask?

Well, if Wreck It Ralph is fiction and therefore so is Tangled, Frozen (you get the picture by now…)

How can Hans be an ancestor of Fred’s rich and prestigious family?

There can’t be two men in any universe who can look that smug.

Is Fred’s family crazy enough to have a statue of a fictional character? (Possibly…)

Or is Hans really a distant relative of the family?

Fred’s family photo, including his father – the one and only Stan Lee.

But how could he be? Hans exists in the fictional fantasy world of Arendelle, not the ‘real’ city of San Fransokyo.

But what if he escaped? What if he got out?

What if Hans has found a way to exploit a secret of the universe to his own advantage? A secret that allows Vanellope to teleport and Genie to visit Disneyland.

What if Hans is a time-travelling, reality-warping outlaw wanted in both his reality and the world of Big Hero 6?

Obviously this is nonsense.

Enchanted and the Disneyverse