Do Zootopia and Robin Hood take place in an alternative Disney universe?

There’s no getting around it. When it comes to the Disney universe, Robin Hood is a problem.

A dedicated blogger can obsessively connect, say, 30+ Disney movies in to a single coherent universe, and still have no idea how to connect all that to a world of anthropomorphic animals living in medieval Britain  (and believe me, I tried).

A world of right and wrong. Outlaws and justice. Foxes and bunnies who wore clothes and did jobs just like people. Obviously this is no coincidence…

Zootopia exists in the exact same world as Robin Hood.

The origins of this theory came from an interview for Coming Soon, where the interviewer put forward this fan question to co-directors co-directors Byron Howard and Rich Moore about the world of Zootopia:

‘If I’m in the universe of Zootopia and I go back in time, did Disney’s Robin Hood actually happen?’

Rather than laugh off the question, the film-makers then gave the biggest endorsement of a fan theory since Frozen co-director Chris Buck confirmed Frozen and Tarzan take place in the same world:

So what makes the co-directors so convinced? Well, for one thing…

The stars of both films are clearly related.

A hug felt across time.

Take Nick and Robin – both rebels that follow their own moral compass, breaking the laws of the land and flying in the face of authority where they see fit. Nick is of course more cynical than Robin but then so is the city of Zootopia, which has far has more moral grey areas than the simple times of medieval Nottingham.

Then there’s Judy and Skippy:

In Zootopia, the pen is mightier than the sword.

Both are as enthusiastic as they are optimistic – bursting to escape their rural life to fight for justice for the little people (no matter how much their families try to keep them home).

And of course the Mayor and King Richard: 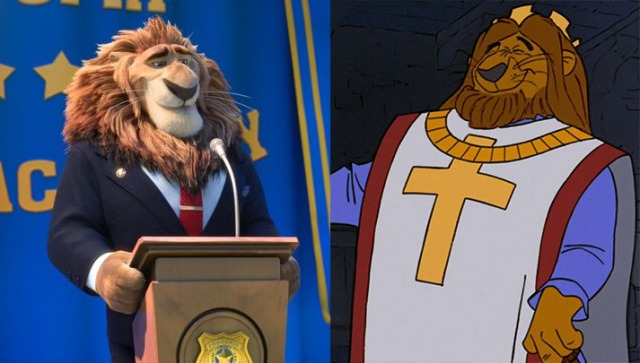 Lions can make both great and terrible leaders in the Disneyverse.

Bold, brash and born leaders (and both equally ignorant when it comes to the treachery being committed by those close to them). The Mayor and King Richard are likeable, if ineffective, and make good in the end.

And what’s more, the villains of both worlds even hire the same henchmen:

Technology may advance but wolf henchmen stay pretty much the same.

Nice pictures you say, but what evidence is there beyond visual similarities?

Well you know the Mayor of Zootopia, but did you catch his full name?

Mayor Leodore Lionheart is the great-great-(etc)-grandson of King Richard ‘the Lionheart’.

Set 800 years after Robin Hood‘s medieval Nottingham, the American city of Zootopia is a continuation of that world’s struggle for justice for the little people against the corrupt officials in power.

Even if that struggle means idealistic young bunnies teaming up with cynical outlaw foxes.

It’s reassuring to know that even with 800 years and an ocean between them some friendships were meant to be.

But still I’m at a loss. How do these movies connect to the one unified universe of the Disney Theory?

Zootopia and Robin Hood have to belong in their own splinter universe set apart from the unified Disneyverse. Even the way magic users in the Disney universe can break the rules of the universe can’t explain how these coherent anthropomorphic worlds connect to the movies like The Lion King.

They’re just too different and too lacking in links to argue otherwise. There must be the Disneyverse and the ‘Hoodtopiaverse’. 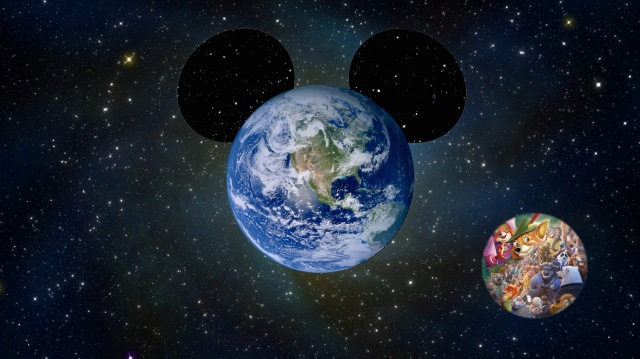 Which begs the question: are there any more movies that connect to this separate universe? Are there other Zootopia-like cities for birds and fish? (Zootopia of course only features mammals.)  Is the Pixar universe then its own separate universe? Or maybe the Game Central of The Wreck-It Ralph Theory still applies, and these separate universes can be connected by one giant computer?

But enough speculation. What do the creators of Zootopia think the connection is?

This entry was posted in The Disney Theories and tagged Disney, Head Canons, Movies, The Lion King, Theories, Wreck-It Ralph. Bookmark the permalink.

9 Responses to Do Zootopia and Robin Hood take place in an alternative Disney universe?