Disney Have Secretly Connected The Disney And Marvel Universes

When the Walt Disney Company bought Marvel Entertainment in 2008, comic-book fans were understandably concerned that Iron Man and the Avengers would soon be making awkward Disney Channel crossovers and filling Disney Store shelves.

But what if I told you that these universes had already been inadvertently linked? That the worlds of Peter Pan and Peter Parker aren’t as distant as you’d think.

What if I told you…

It is possible to connect Frozen and Captain America in four simple steps.

Step 1 – The first step is easy. Frozen and Tangled have been fairly conclusively linked, not least because Rapunzel from Tangled attends Elsa’s coronation.

Tangled‘s Rapunzel and Flynn Rider turning up in Frozen was a big clue.

(In-turn, Tangled can be linked to 29 other Disney worlds, including the Disney princesses of Beauty and the Beast and The Little Mermaid.)

Rapunzel in Tangled reading Beauty and the Beast, The Little Mermaid and Sleeping Beauty.

Step 2 – Tangled then connects to Wreck-It Ralph, which features cameos from several other Disney characters. 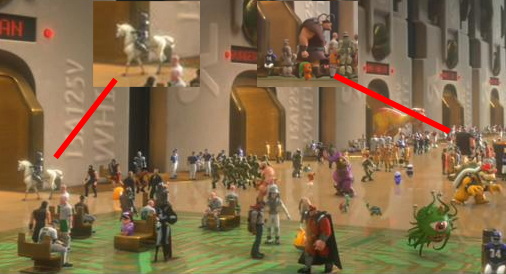 Tangled‘s Maximus the horse and Vladimir the pub thug in Wreck-It Ralph.

Step 3 – Of course, Wreck-It Ralph is better known for its videogame cameos. Among these are Street Fighter‘s Ryu, Chun-Li, and even M Bison and Zangief  in the same image used above.

Ryu wrecks a car with the help of Wreck-It Ralph.

Step 4 – All of whom have fought the heroes and villains of Marvel on numerous occasions.

This means that the track between the two universes has already been laid. That somewhere in the world created by Wreck-It Ralph, there is a lobby where Marvel superheroes intermingle with videogame characters and Disney princesses (not to mention DC superheroes, Transfomers and Archie).

This is the lobby that connects Captain America and Frozen.

What do you think Marvel and Disney fans? Do you welcome a shared universe? Or does mixing the two ruin both?

Would would win between: