While looking for details to support the theory connecting Frozen‘s King and Queen to Tarzan‘s parents, I actually found more compelling evidence to suggest Tarzan‘s Jane is related to Belle.

Not one to walk away from a good Disney theory, I thought it was worth presenting that evidence.

So here it is:

In my Disney world article, I point out that a teapot looking like Mrs. Potts from Beauty and the Beast appears in Tarzan. That theory suggests its another symptom of Disney’s erratic magical characters, but what if it wasn’t?

That is some hard-wearing table-wear! (Chip notwithstanding)

What if the tea-set Tarzan’s gorilla-friend Terk is drumming on is actually a centuries-old heirloom from the Porters’ noble past? In fact, it could be just one of the clues connecting Jane Porter to Belle from Beauty and the Beast.

You see, cutlery isn’t the only thing Jane has inherited from her royal ancestor.

Turns out style is genetic…

…as is being nuts.

Her taste in (slightly wild) men:

The beauties and their hygienically-challenged beasts.

And her passion for civilising those men:

It’s also interesting that we don’t have a surname for Belle or her father Maurice, and Belle goes on to marry Beast, whose popular name ‘Prince Adam’ isn’t even officially recognised.

Through an eccentric German Duke, of course.

‘Like a chicken with the grace of a monkey!’

As commenter Kate O’Gara pointed out on The Tarzan Theory, Frozen‘s Duke of Weselton looks more than a little like Jane’s father, Professor Q. Porter.

This is because he is the familial link that connects Beauty and the Beast and Tarzan.

If we take an estimate from the original story’s publication (La Belle et la Bête in 1740), Beauty and the Beast‘s French setting is probably somewhere in the late to mid-1700s. Based on similar estimates, Frozen is likely set in the mid-1800s.

However, Frozen‘s Duke is  from a German town called Weselton. How can he be the grandson of a French prince?

Because something happened between those two dates…

Prince Adam and Belle probably fled France to avoid the guillotine but were still well-off enough to win favour with the German nobility. It would explain why the Duke incorrectly corrects the pronunciation of ‘Weselton’ as ‘WESS-ul-tun!’ when a German native would pronounce it ‘VAY-zel-tun’. (The Duke’s German accent is authentic, but it’s possible he is too used to his immigrant parents’ pronunciation.)

This family link would also explain why the Duke is so terrified of ‘sorcery’ and magical women with long fair hair.

Because his grandfather was cursed by a blonde enchantress. 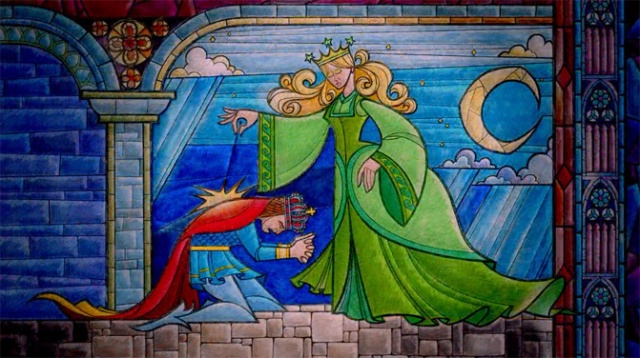 Come to think of it, who is this ‘enchantress’?

Clearly the legend of his grandfather falling afoul of a magical enchantress have been passed down in the Duke’s family (though sadly not accompanying the lesson about vanity – as proven by his poorly-attached toupee).

Since the Duke is frozen out of all future trade with Arendelle at the end of the film, it’s possible he wouldn’t have been popular with his constituents on returning to Weasel Town. Maybe he would start looking for a change of scenery. He’s clearly a resourceful and adaptable businessman, and his family wouldn’t be strangers to change.

He would just need the right opportunity to profit from, say…

The Duke seems like the kind of guy who knows a goldmine when he sees one. If he made it to Britain soon after the first Industrial Revolution, he would probably do pretty well for himself (and help his children to do so too).

Well enough that his grandson went on to be a professor with the means to lead expeditions to the African continent. Not filthy rich, by any means, but rich enough to be well spoken (that German accent would grow unpopular in pre-World War I Britain) and hold on to a few heirloom tea-sets.

And having come from a family that had yo-yo’d between rags and riches across Europe, you can bet his descendants would be adventurous, adaptable and able to understand people who don’t necessarily speak their language.

But the family tree doesn’t end there!

Because in The Disney Theory I explain that Professor Q Porter possessing a toy of Little Brother from Mulan proves that his family went on to make the fictional movies of the Disneyverse (Snow White and the Seven Dwarfs, Dumbo, Mulan).

In Tarzan we actually see that Professor Q Porter owns the equipment of early cinema.

The Disneyverse Has
Its Own Walt Disney

This entry was posted in The Disney Theories and tagged Beauty and the Beast, Disney, Frozen, Head Canons, Movies, Tarzan, Theories. Bookmark the permalink.