As an obvious fan of Disney Theories and fan speculation I’m always on the look out for interesting theories that might shed light on popular Disney movies.

So when people suddenly start talking about the link between the death of Walt Disney’s mother and the fictional deaths of mothers in his films I’m definitely going to listen.

In this article I explore this Disney mother theory in full, question it, and explain what I think Disney theories are about and why real tragedies are not part of the fun.

In a recent interview with Glamour, director of Maleficent Don Hahn is asked about the motherly presence in his film as opposed to their absence in The Little Mermaid or Beauty and the Beast. In his answer he tells a story about Walt Disney’s mother:

‘Walt Disney, in the early 1940s, when he was still living at this house, also bought a house for his mom and dad to move into. He had the studio guys come over and fix the furnace, but when his mom and dad moved in, the furnace leaked and his mother died. The housekeeper came in the next morning and pulled his mother and father out on the front lawn. His father was sick and went to the hospital, but his mother died. He never would talk about it, nobody ever does. He never spoke about that time because he personally felt responsible because he had become so successful that he said, “Let me buy you a house.” It’s every kid’s dream to buy their parents a house’

The story is a tragic one, and it’s hard to imagine such sadness in a man who was already responsible for so many heart-warming children’s films and whose name would continue to be attached to wonderful family films for decades to come.

So it’s a shame that this interview lead to an outbreak of click-bait headlines like ‘The Tragic Reason Why Disney Movies Rarely Have Mother Characters’ and ‘The Heartbreaking Reason Why Disney Princesses Don’t Have Mothers’. The same sites that often take my dumb Disney theories and ‘re-purpose’ them for their own page views regurgitated this story as light entertainment and treated it as just another ‘Disney theory’.

And it’s not even true.

Of course the death of Disney’s mother is well-documented, and while Hahn himself acknowledges he’s not a psychologist it’s easy to believe that Walt Disney felt responsible for the sequence of events. The frustration is that this story is being presented as an interesting theory when even the basis of it is so obviously flawed.

In fact, the only Disney movies made during Walt Disney’s lifetime where a mother dies or is notably absent are Snow White (1937), Bambi (1941) and Cinderella  (1950), and as Snopes points out, the first two were either already released or well in to production by the time of Flora Disney’s death in 1938. 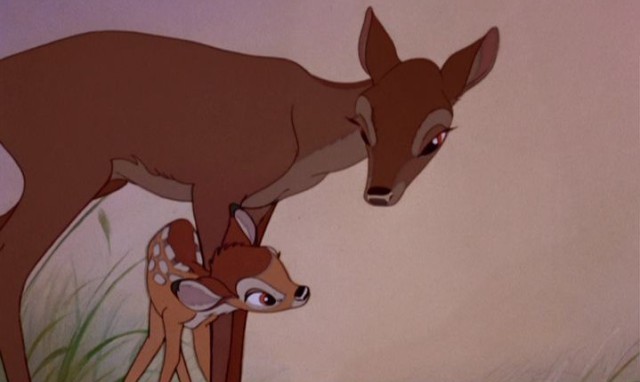 So why are mothers so absent in Disney movies?

What is overlooked in Hahn’s interview is the other reason he gives for the absence of mothers:

‘One reason is practical because the movies are 80 or 90 minutes long, and Disney films are about growing up. They’re about that day in your life when you have to accept responsibility. Simba ran away from home but had to come back. In shorthand, it’s much quicker to have characters grow up when you bump off their parents. Bambi’s mother gets killed, so he has to grow up. Belle only has a father, but he gets lost, so she has to step into that position. It’s a story shorthand.’

In many of these Disney movies, the absence or loss of a parent is as traditional and time-honoured as the fairy tales they’re based on. My original Disney theory concluded that all Disney movies take place in a world that is full of ‘sons that long for adventure, daughters who dream of freedom, parents who die tragically and evil relatives who seek to control them’. These tropes are often essential to the narrative, and while the personal experiences of the storyteller are of course going to inform the story that does not make the resulting story a symptom of the teller.

The reason the story about Walt Disney’s mother resonates is the same reason it resonates with audiences when a Disney protagonist loses a parent. The two don’t have to be connected to both be true.

Hahn tells us a sad story, and it’s one that will make future viewings of Bambi even more profound, but Disney movies are more than the product of one man, the teams of talented people that worked on them give them a scope and depth that makes them so timeless. Walt Disney was just the visionary who started something magical that still lives on to this day.

Flora Disney would be proud.

This entry was posted in The Wider Disneyverse and tagged Aladdin, Beauty and the Beast, Disney, Frozen, The Little Mermaid, Theories. Bookmark the permalink.